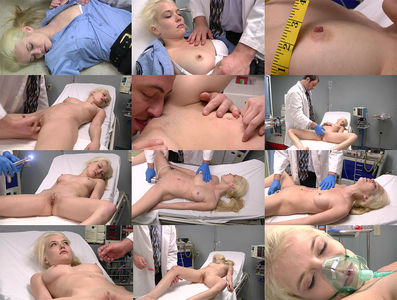 A police officer goes in for her special exam. As she is filling out her paperwork the doctor gives her a shock with the defibrillator. He shocks her one more time to make sure she is out so the exam can begin. He takes her back to the exam room and hooks her up to mixed oxygen to keep her sedated, then begins the procedure. He removes her clothes, then checks out her body. He fondles, then measures her breast size. Then, he starts fingering her to determine her orgasmic response. It is good, but not what he had hoped. So, he tries oral stimulation and then some more finger fucking, but this time with latex gloves. Then, he moves on to his shock-dildo Using jolts of electricity, he is able to stimulate a huge orgasmic response. Later, he wakes her up, but she is too sleepy to talk to, so he puts her under gas again and continues with a few more tests before leaving her to rest.

Note: Actresses are over 18 at the time of filming and the word “teen”, “teenage”, “young girl” is only meant to imply legal age characters regardless of audience interpretation.